Skip to content
Do you remember the exact moment when motorcycling first inspired you? It only takes a split second to ignite a passion that will endure a lifetime. I have always had toy motorcycles, especially growing up, whether they were for my G.I. Joes or Ninjas turtles to ride or just 1:10 scale models. I didn’t grow up like most in this industry who started on dirtbikes and went on from there. I had to wait until I was an adult. The toys were just accessories for my heroes to play out their storylines, I never thought of them much nor had a favorite as looking back I mostly thought Ninja was just the name of the bike my Turtles rode.
Fast forward to 2001 when I had just graduated from a High School Military Academy. I was at my grandma’s house in her living room watching her console TV because it was rigged to watch cable. While flipping through the channels with a literal clicker, I came across the Speed Channel showing a World Superbike race. Having never seen actual motorcycle racing I was instantly captivated. Then it happened, a floating helicopter shot of a left-hand hairpin turn. My jaw hit the floor. There was a closeup of Troy Bayliss on his Ducati 996 RS with my first ever glimpse of a single-sided swingarm. The five-spoke wheel was spinning freely with what seemed like nothing holding it on. I had to know how it worked and from that moment I was hooked.
The Ducati 916/996/998 then became my poster bike. I had the picture of the 916 taken by Robert Bullivant prominently displayed in poster form. It wasn’t until later that I met Robert, as his gallery was just down the street from the St. Louis Ducati/Triumph dealership where I worked. From the moment I watched that race, I went down the bottomless dark rabbit hole that is being a motorcycle enthusiast and never looked back. 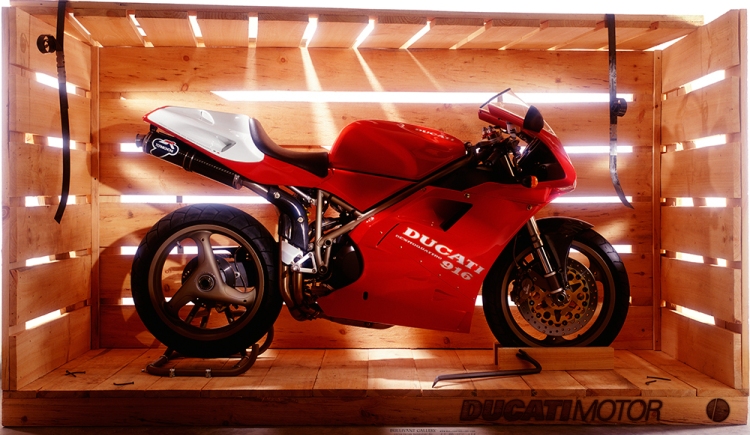 Headline photo taken from this article which you should also read : https://www.ridejournal.com.au/troy-bayliss-ducati/